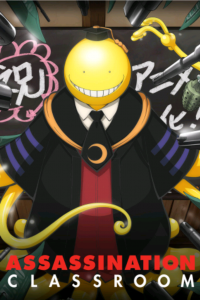 Blending together the very different genres of sci-fi and comedy, the Lerche studio brings for its viewers a unique and gripping series. The Assassination Classroom is an anime series that has a dedicate fan following because of its humorous characters and fantastic plot.

Based on the manga series illustrated by Yusie Matsui, Assassination Classroom aired from year 2014 to 2016 and managed to leave every viewer at the edge of their seat with every episode. Advancing upon this further, let’s see what this series is about and exactly how many filler episodes it has.

Although the plot of Assasination Classroom is a little complex to explain, we will still give it our best shot here. The manga novels and anime follow the story of a world where an octopus-like creature called Koro sensei has destroyed the moon and plans to take over the earth soon. The Japanese government has promised a high reward for anyone who is able to kill this creature and save the world.

On the other hand, a group of misfits including the main character, Nagisa Shiota study at the Junior High School where Koro Sensei has recently been appointed as their new homeroom teacher. Their plans of availing the reward by the government after killing Koro are ruined as they discover the creature to be the best teacher they have ever had and start to uncover the secrets to its past and intentions.

How many filler episodes does Assassination Classroom have?

Taken from the twenty-one volume long manga novels, Assassination Classroom contains a total of forty-eight episodes. We are pleased to inform you that amongst these episodes, not even a single one is filler and every part is crucial and canon to the plot and journey of revealing Koro Sensei’s true identity. Assassination Classroom has a reported zero filler rate.

Given this key detail, we urge you to start watching the anime show Assassination Classroom right now and find yourself gripped by the thrilling plot and humorous dialogues completely. Will this group of misfits be able to finish the job and save the planet or will this liking for their new homeroom teacher cost them the lives of billions? Watch to find out!