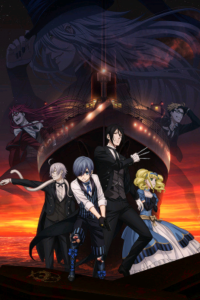 Have you always loved and sided with villains more than heroes? Or do you find yourself hooked in antagonist’s stories easily? If your answer to both of those questions is a yes then Black Butler should definitely be added to your to watch anime list.
Since its premiere in 2008, Black Butler has become popular among the audience and renewed for 7 OVAs. The series were concluded four years later and hence lets take a look at how many of these episodes were crucial to the main character, Ciel Phantomhive’s character development and quests.

How many filler episodes does Black Butler have?

Black butler is adapted from the manga series written by the same author. The four year long airing time of the series meant that either ample content was available for the anime to be adapted on or it contained a lot of filler episodes.
Much to everyone’s despise, the latter is the case with Black Butler. With a high filler ratio of 63 percent, Black Butler contained many diverging and distracting episodes. From the 46 total episodes, only 17 were canon and taken directly from the manga series. The remaining were filler episodes and add on.

How can I skip the filler episodes?

If you are someone who is easily distracted and have a limited attention span, then we suggest you to skip the filler episodes of Black Butler and get back to them later on. For this reason, you can find the list of every filler episode name and number of Black Butler on our website and stick to the original manga plot of the series by skipping through these.